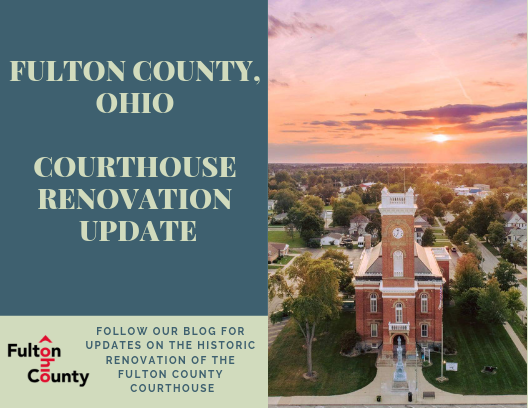 History of the Fulton County Courthouse

Fulton County was established on February 28th, 1850 from parts of Henry, Lucas and Williams Counties. The Ohio General Assembly appointed three Commissioners to select the county seat of the newly formed county. The Commissioners chose a location near the geographical center of the county, which was named Ottokee at the suggestion of Colonel Dresden Howard. Howard suggested Ottokee to honor the prominent Odawa Indian, Chief Ottokee (Ot-to-kee).

Court proceedings were held in the home of Robert Howard until a courthouse could be constructed. In 1851, the first courthouse was built. The courthouse was a two story frame structure rising to a dome. (The new Fulton County Museum and Welcome Center is built in rendition of this courthouse). This courthouse burned in a fire in 1864 forcing the county to hastily plan a new second courthouse.

The second courthouse was constructed out of brick, with the facade punctuated by pilasters separating the arched windoews. This courthouse served for several years as Ottokee remained the county seat despite many defeated attempts to move the courts by voters. In 1869, a railroad company surveyed the area and chose Wauseon as a stopping point. Shortly after, voters chose Wauseon as the new county seat, which included $5,000 to complete a new courthouse. Years after the move, the old courthouse was still in use as the county infirmary.

The new courthouse, the third for the county, and the first for Wauseon, was completed in 1872 at a cost of $45,722.27. This is the courthouse current used today. Architect, C.C. Miller, designed the structure int eh Italianate style. Alexander Voss and H.B. Bensman were responsible for the building and construction. The current courthouse stands as a Fulton County landmark, and was added to the National Register of Historic Places in 1975.

Beginning in the fall of 2018, significant renovations to the courthouse will begin with the intention of restoring the Common Pleas courtroom to its original facade. Other updates will include replacing the cooling and heating systems, add security and technology features, install a new elevator, and several other updates that will preserve the building for many years to come.